I've added a diagrams backend to my typed-spreadsheet library which you can use to build composable graphical programs that update in response to user input.

Here's an example program that displays a circle that changes in response to various user inputs:

Here is a video showing the example program in action:

The first half of the main function (named logic) requests four users inputs to parametrize the displayed circle:

Each of these inputs is an Updatable value and we can express that using Haskell's type system:

For example, consider this pure function that consumes four pure inputs and produces a pure diagram:

Normally if we compute a pure function we would write something like this:

However, this result is static and unchanging. I would like to transform this function into one that accepts Updatable arguments and produces an Updatable result.

Now the combine function accepts four Updatable arguments and produces an Updatable result! I can then pass this result to the graphicalUI function which builds a user interface from any Updatable Diagram:

The Applicative operations ensure that every time one of our primitive Updatable inputs change, the composite Updatable Diagram immediately reflects that change.

One reason I wanted diagrams integration was to begin building interactive charts for typed spreadsheets. I'll illustrate this using a running example where I building up a successively more complex chart piece-by-piece.

Let's begin with a simple rectangle with an adjustable height (starting at 100 pixels):

When we run this example we get a boring chart with a single bar:

However, the beauty of Haskell is composable abstractions like Applicative. We can take smaller pieces and very easily combine them into larger pieces. Each piece does one thing and does it well, and we compose them to build larger functionality from sound building blocks.

For example, if I want to create a bar chart with five individually updatable bars, I only need to add a few lines of code to create five bars and connect them:

This not only creates a bar chart with five bars, but also auto-generates a corresponding input cell for each bar:

Even better, all the inputs are strongly typed! The program enforces that all inputs are well-formed and won't let us input non-numeric values.

We also benefit from all the features of Haskell's diagrams library, which is an powerful Haskell library for building diagrams. Let's spruce up the diagram a little bit by adding color, spacing, and other embellishments:

One embellishment is a little animation where bubbles fade in and out near the top of the bar:

We can customize the visuals to our heart's content becuse the spreadsheet and diagram logic are both embedded within a fully featured programming language.

The typed-spreadsheet library illustrates how you can use the Haskell language to build high-level APIs that abstract way low-level details such as form building or reactive updates in this case.

In many languages high-level abstractions come at a price: you typically have to learn a domain-specific language in order to take advantage of high-level features. However, Haskell provides reusable interfaces like Applicatives that you learn once and apply over and over and over to each new library that you learn. This makes the Haskell learning curve very much like a "plateau": initially steep as you learn the reusable interfaces but then very flat as you repeatedly apply those interfaces in many diverse domains.

If you would like contribute to the typed-spreadsheet library you can contribute out-of-the-box charting functionality to help the library achieve feature parity with real spreadsheet software.

You can learn more about the library by checking out:

I'm releasing the typed-spreadsheet library, which lets you build spreadsheets integrated with Haskell. I use the term "spreadsheet" a bit loosely, so I'll clarify what I mean by comparing and contrasting this library with traditional spreadsheets.

The best way to explain how this works is to begin with a small example:

The above program builds a graphical user interface with four user inputs in the left panel and one output in the right panel: 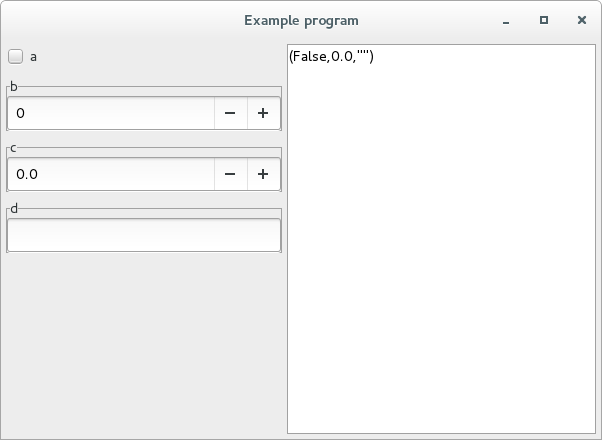 The output is a text representation of a 3-tuple whose:

The right panel immediately updates in response to any user input from the left panel. For example, every time we toggle the checkbox or enter numbers/text the right panel changes: 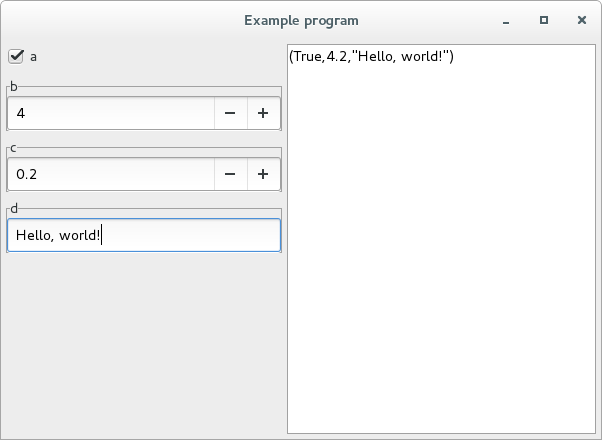 So in one sense this resembles a spreadsheet in that the output "cell" on the right (the text panel) updates immediately in response to the input "cell"s on the left (the checkbox, and numeric/text entry fields).

However, this also departs significantly from the traditional spreadsheet model: input controls reflect the type of input in order to make invalid inputs unrepresentable. For example, a Bool input corresponds to a checkbox.

The generated executable is an ordinary binary so you can distribute the program to other users without needing to supply the Haskell compiler or toolchain. You can even fully statically link the executable for extra portability.

For example, say that I want to create a mortage calculator for somebody else to use. I can just write the following program:

... and compile that into an executable which I can give them. When they run the program they will get the following simple user interface: 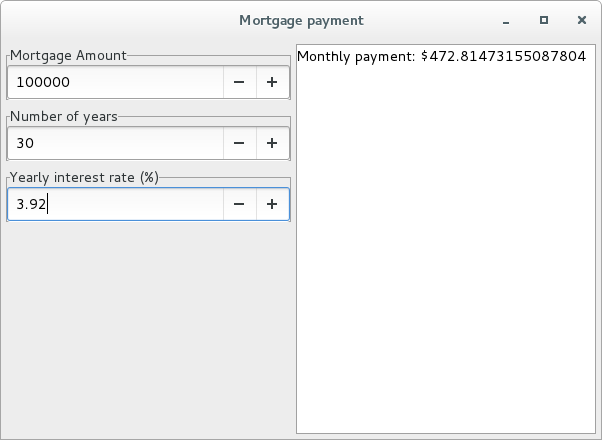 Or maybe I want to write a simple "mad libs" program for my son to play:

This generates the following interface: 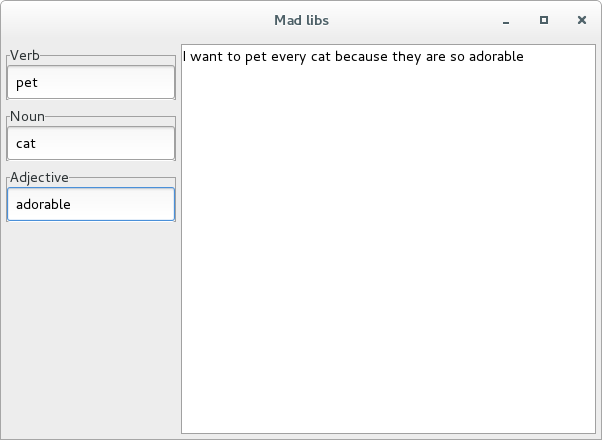 In the future the library may provide support for diagrams output instead of Text but for now I only provide Text outputs for simplicity.

The central type of this library is the Updatable type, which implements the Applicative interface. This interface lets us combine smaller Updatable values into larger Updatable values. For example, a checkBox takes a single Text argument (the label) and returns an Updatable Bool:

Using Applicative operators, (<$>) and (<*>), we can lift any function over an arbitrary number of Updatable values. For example, here is how I would lift the binary (&&) operator over two check boxes:

... or combine their output into a tuple:

However, to the untrained eye these will look like operator soup. Heck, even to the trained eye they aren't that pretty (in my opinion).

Fortunately, ghc-8.0 will come with a new ApplicativeDo which will greatly simplify programs that use the Applicative interface. For example, the above two examples would become much more readable:

That's much easier on the eyes. ApplicativeDo helps the code look much less like operator soup and presents a comfortable syntax for people used to imperative programming.

Spreadsheet integration with Haskell comes with advantages and disadvantages.

The obvious advantage is that you get the full power of the Haskell ecosystem. You can transform input to output using arbitrary Haskell code. You also get the benefit of the strong type system, so if you need extra assurance for critical calculations you can build that into your program.

The big disadvantage is that you have to relaunch the application in order to change the code. The library does not support live code reloading. This is technically feasible but requires substantially more work and would make the application much less portable.

If you follow my previous work this is very similar to a previous post of mine on spreadsheet-like programming in Haskell. This library simplifies many of the types and ideas from that previous post and packages them in a polished library.

If you would like to contribute to this library there are two main ways that you can help:

If you would like to use this code you can find the library on Github or Hackage.